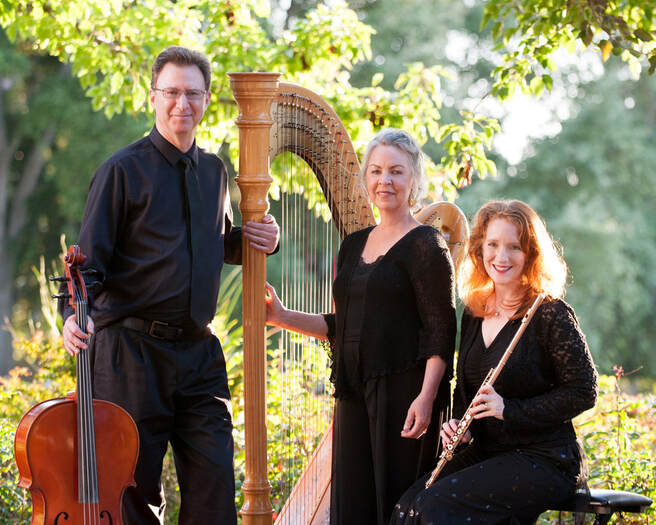 “Your music is so beautiful. It is truly music for the soul.” —Deb Meyer
​The Lush sounds of ﬂute, harp and cello have inspired many colorful arrangements and some original compositions that comprise the trio’s repertoire. Both Alice Lenaghan, ﬂute, and Dan Reiter, cello, are principals with the Oakland Symphony. Natalie was principal harp with the orchestra for thirty ﬁve years. 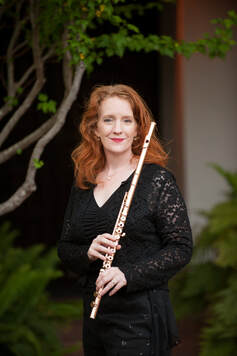 ​
​ALICE LENAGHAN is an active orchestral musician both locally and nationally. She is Principal Flute of the Oakland Symphony and has performed Principal Flute with the Detroit, Toledo, Flint, Napa, Modesto, Stockton, and Fremont Symphonies, and the Sacramento and Michigan Operas. She has appeared as concerto soloist with several orchestras, performed on center stage at the California State Fair, at the Hollywood Bowl, AT&T Park, and as a ﬂute soloist throughout Ireland with the Placer Pops Chorale. 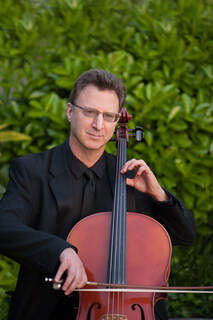 ​DAN REITER is the Principal Cellist with the Oakland Symphony, Fremont Symphony, and Festival Opera Orchestra. Along with his active career as a performer, Dan is also a composer and arranger. In 1999 he won an IZZY Award for Raga Bach D minor for cello, percussion and solo dancer Robert Moses. He was the recipient of a grant from the James Irvine Foundation which enabled him to compose Mysterium, which was premiered by Oakland Symphony in 2013. Gayatri Transﬁgured, a tone poem for cello and orchestra, was premiered in 2018 by Fremont Symphony. Dan’s ﬁnely crafted and colorful transcriptions and arrangements are the foundation of The Paciﬁc Arts Trio’s repertoire.
​The trio performs classical chamber works by many gifted composers such as Tchaikovsky, Debussy, Scarlatti, Albeniz, Respighi, Mozart and others. Dan Reiter has added some of his own compositions and transcriptions which often include exotic elements, textures and improvisations that have been inﬂuenced by music traditions from India and the Middle East. The trio toured Alaska in 1988 and regularly performs recitals throughout Northern California. You can hear them on YouTube performing a live concert at Westminster Presbyterian Church, Sacramento. Selections include:
Malaguena
Reverie and Clair de Lune by Debussy
East Meets West by Ravi Shankar
Three Favorite Melodies, Welcome, Concerto, and Dream by Turlough O’Carolan
Piccolo Concerto, Cello Sonata #5, and Winter Concerto by Vivaldi
The trio is available for concerts and special events alike, with repertoire tailored to the theme of the event.